Having just returned from a bookbinding pilgrimage to London, I’ve got loads to share about the many wonders we witnessed across the seas. But in the meantime as I sift through the trip photos, I’m going to try to get through a few quick posts about recent projects.

I thought an appropriate sequel to and co-mingling of the posts on case bindings and paper marbling would be to share the two leather case bindings that I finished using the textblocks with marbled edge treatment. In both cases, I used siding-up paper pulled from the same tray as the edges to get a marbled-all-over look. The results are a little over the top in that 19th century account book sort of way, but exude a certain degree of, shall we say, opulence. 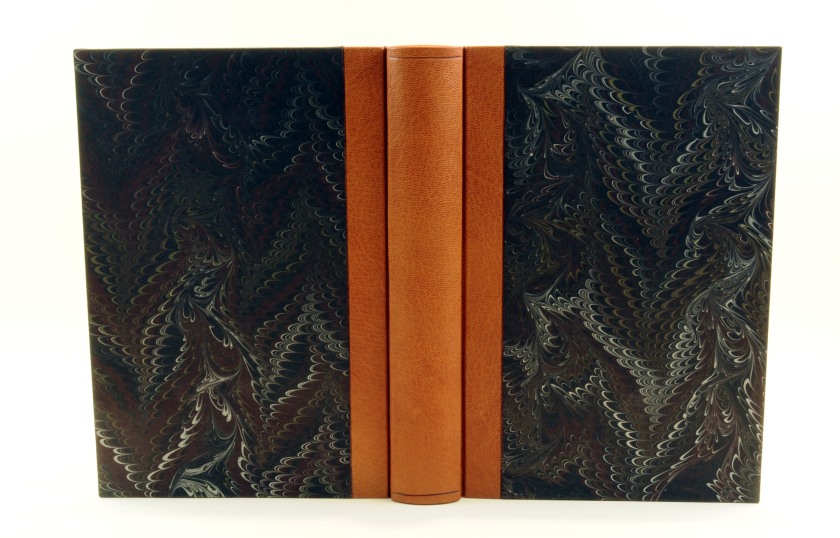 I started out with the same basic form of textblock that I’ve used in other case bindings. The sections are sewn on flattened cord with a thick enough thread to get some swell. For these books I used an endpaper structure that included a waste sheet. As the leather is worked damp, I wanted to avoid any dye transfer to the endpapers during covering.

After sewing, the textblock was glued up and rounded and backed. The textblock forwarding did distort the edge marbling a bit: I ended up with a bit of stair-stepping on the fore-edge that produced some white lines through the pattern. I imagine this effect would be reduced if my rounding and backing were better. Practice, practice!

The case is constructed in much the same way as the “built-in” groove or Bradel-style case: a stiff spine strip adhered to strong paper that is attached to the boards before covering, with enough space between the spine and boards for an open joint. The leather-covered case structure has two adaptations: increased joint spacing to accommodate the thicker leather and a bit of a headcap “cheat” known as the Bart. To achieve this feature, the spine strip material is trimmed slightly longer than the height of the boards and given a rounded shape with many, small darts. The final shape looks like Bart Simpson’s head – thus the nickname. I failed to get a picture, but here is the diagram from my notes to illustrate.

A horizontal score line at the tips of the darts allow the shape to fold over after covering – but more on that later.

Arthur Johnson’s Manual of Bookbinding (1978) has a nice description of covering a quarter or half binding with an open joint (pp. 108-114). The method I used for covering and finishing these case bindings was similar, except for the formation of the headcaps and, of course, being done off the book. As a first year, I’m still grappling with the very basics of leather paring and covering. Quarter or half-style covering are excellent starting points for me because most of the paring can be done on the Scharf-Fix, and the pieces of leather are not very large – so any mistakes aren’t all that expensive. After flat paring the leather for the spine and the corners to the same thickness as my in-filling material (~0.5mm), I further pared the turn-ins German-style to a thickness that would easily hold a fold. Linda Blaser and Frank Mowery’s handout from the 1998 GBW Standards seminar has a good description of German paring with the Scharf-Fix (found here). As a final step, the head and tail turn-ins of the spine strip are further shaped and “feathered” out with the knife.

The leather is evenly dampened from the hair side with a sponge, thickly pasted up (with flour paste), and set aside for a moment. The paste is then carefully scraped off with a bit of board and a new thin layer of paste is applied. The corners and spine of the case are then covered and the headcaps set with the textblock in the case. 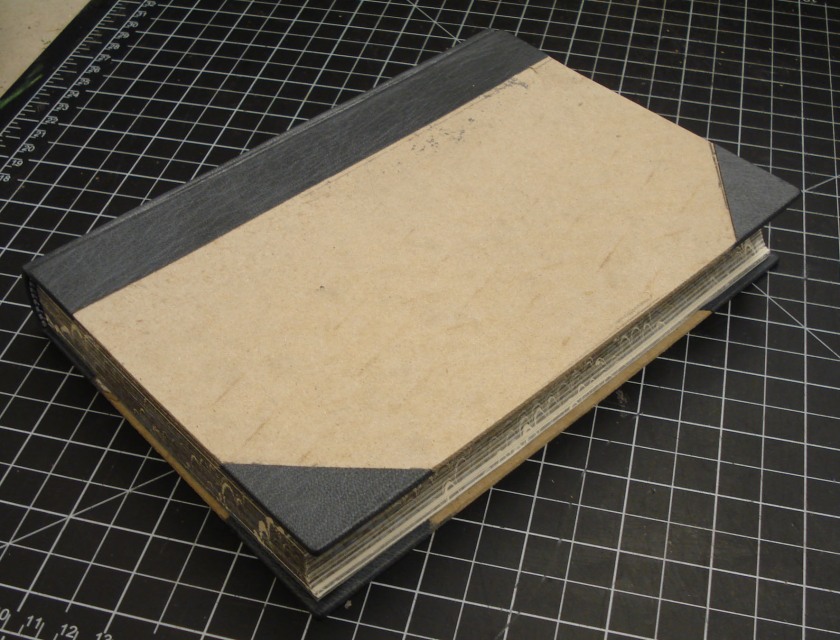 Of covering with leather, Johnson (1978) says, ” Leather is an amenable material: it can be modeled while wet and will retain its shape on drying. However, it is marked easily in its wet state and excessive use of the folder will cause scoring” (p. 108). I learned this lesson all too well while covering these books, and lo, it was a painful one to learn.

The headcaps made with “the Bart” are satisfying because they hug the endbands well, although I’ve got some improvements to make on mine.  Like many aspects of bookbinding, unrefined work early on compounds as you go along; Uneven and asymmetrical paring with the knife results in headcaps that are puffier on one side than the other. 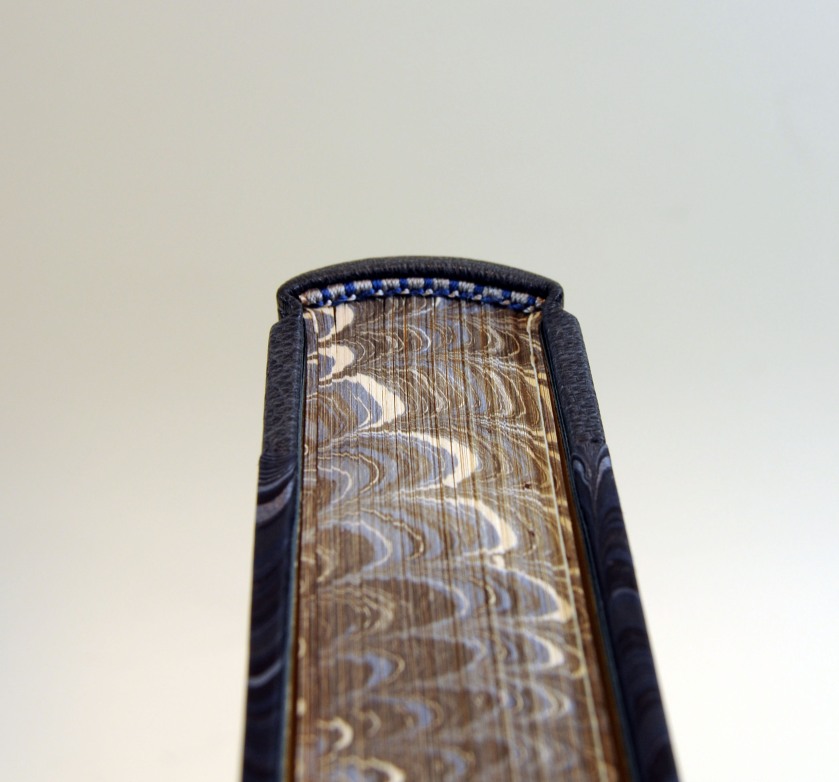 The same headcap from the back.

When the leather has had ample time to dry, the case is then ready for siding up.  I did not edge pare the leather that goes down onto the board, and because it is quite thick. The face of each board must be in-filled to the same height so as to avoid unsightly lumps in the transition from leather to siding up material.  As a finishing touch to these case bindings, also I tooled thin, blind lines where the leather meets the siding up paper at both the corners and the spine edges. The image below shows some detail. 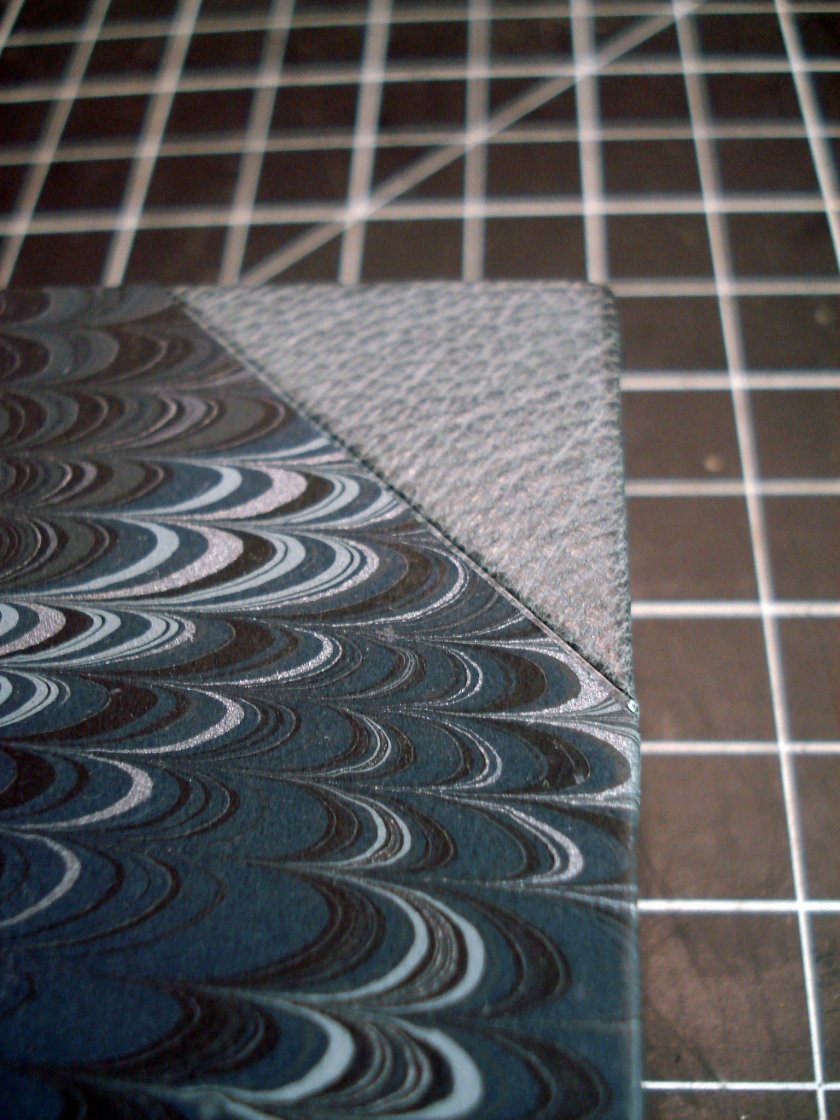 In the queue, I’ve got split board bindings, German paper bindings, a portfolio production, limp leather bindings, and our trip to England. Your patience, Gentle Reader, soon will be rewarded!