As Boston is currently being pummeled by snow, I figured it best to stay inside and catch up a bit on my bloggin’. Ever since we first tried out some variations on limp medieval structures back in October, I’ve been meaning to revisit them using materials that are a little more refined than paper covers and laminated skin spine plates. I went back through the chapter on limp structures in Szirmai’s (2000) Archaeology of Medieval Bookbinding as well as Pam Spitzmueller’s article on long and link stitch structures (GBW Journal, 2000)  for some inspiration from historical examples. It seems in any of the literature on this type of structure, one inevitably finds images of two particularly fine examples from the Herzog August Bibliothek in Wolfenbüttel (pictured left and center below). 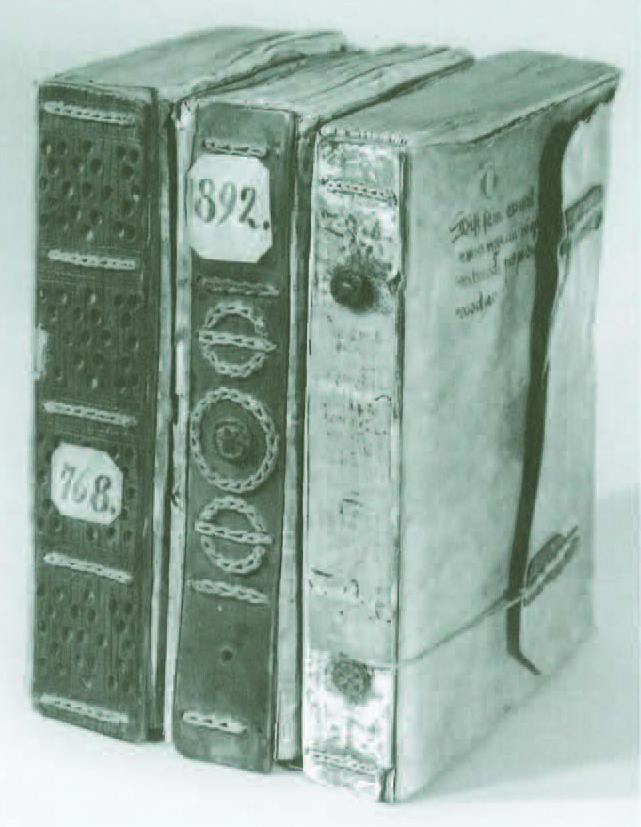 Loubier (1926, p. 9)  describes these structures as “Kettenstichheftung”, and Szirmai (2000) indicates that they amount to about 40% the total number of medieval volumes with rigid back plates dating from 1375 to 1500 surveyed in the literature (p. 299). These volumes are nearly all literary manuscripts on paper, covered in course parchment that is cut flush with the textblock. Some uncommon attributes include covers lined with paper, limp leather coverings, or leather edging.  Analysis of these structures has determined that the “equal number of chain links at each sewing station could be obtained by alternately omitting linking at the intermediate stations” (Adam, 1910). This sewing pattern is exactly as Larsson demonstrated in his 2004 presentation at Standards.  Szirmai states that “some chains are not functional but are solely decorative: the circular and two of the perpendicular chains on HAB Cod.Guelf.892 Helmst. (see Figure 10.12 [centre]), are chain stitches ’embroidered’ onto the back plate before sewing” (p. 299).

There is something quite satisfying about the sewing pattern in the center binding above (no. 892) and it has inspired a number of contemporary variations – including this one by Dominic Riley.

The fact that the circular sewing is not part of the structure makes the whole operation quite a bit easier; however there is still some planning that must go into mapping out the stations. While the original is done with a horn spine plate, I made a variation on this structure with a maple spine plate and goatskin parchment covers. As the width of my piece of maple was somewhat narrower than the horn used in the original, I decided to use the dimensions of my original spine piece as the basis for my final model size, rather than attempt to make an exact duplicate. There are quite a few holes to drill for this sewing pattern, and to ensure that I got it right, I first worked the pattern out to scale on paper. 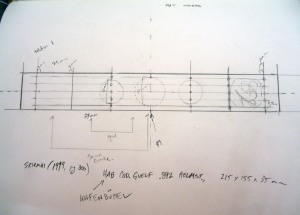 As you can see, I’ve shifted the alignment of the 2nd and 5th sewing stations in order to make a more even spacing in the pattern for my model – with the kind of long and skinny dimensions of this book, it just looked better to me.   Next I went ahead and made a model of the spine plate with binder board covered in paper to check that the pattern looked alright with the rather thick size of thread (18/5) that I intended to use.

Taking the time to make this ‘dummy spine’ actually worked to my advantage, because once I had checked the layout, I just used it as a jig to punch the parchment cover and mark the wooden spine plate for drilling. When the spine plate and cover were ready, I stitched them together along the circular parts of the pattern. Paper sections were then folded, trimmed to the height of the spine piece, pierced with 6 stations, and attached to the cover via the straight chain sewing of the pattern using Larsson’s method. The final product looks like this:

The small sheet size and relative thickness of the paper, coupled with the rigid spine plate, make the opening of this book is kind of stiff but quite strong. 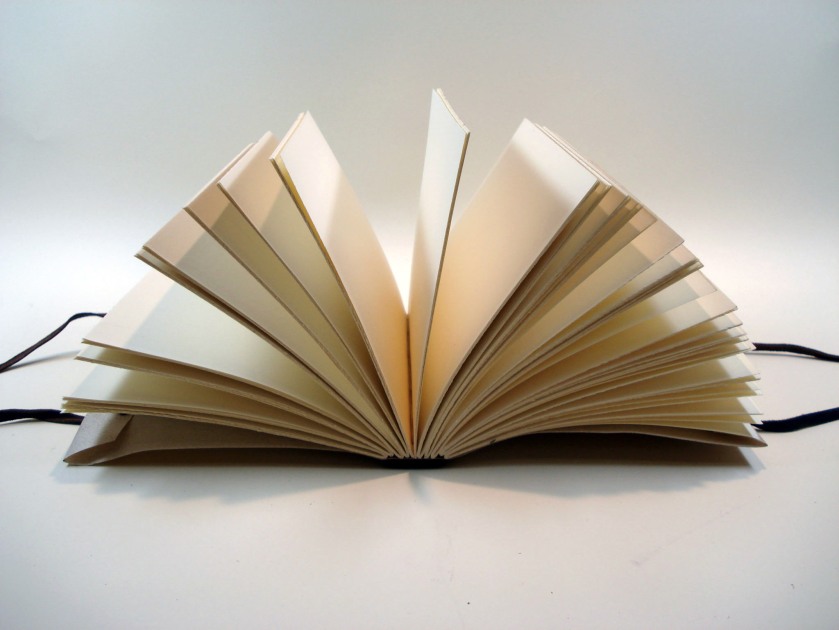 As for the fore-edge treatment: in the photographs of the original, it looks like there were, at one time, buttons attached to the spine plate. I can only assume that there is/was a fore edge flap with ties that once attached to the buttons to hold the volume closed, however I could not find a decent photo of what is actually going on there. Szirmai includes diagrams of a few variations on leather ties for limp structures, and I decided to go with a three-hole structure (listed as 3a in the diagram below) that offers a simple outward appearance. 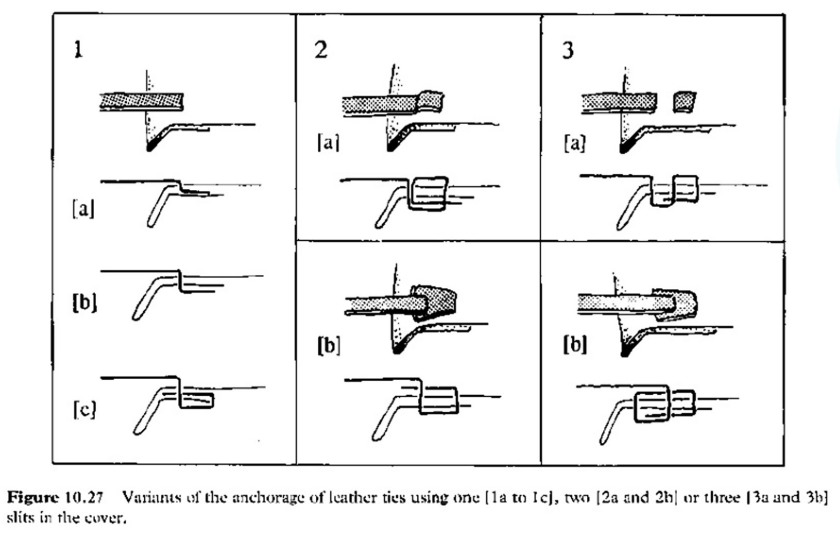 The diagrams appear to illustrate the leather tie lacing through slots in the covers, but I found that after mechanically softening the leather, the lacing looks a bit neater when done through rounded holes. This also keeps the parchment from splitting or tearing at the edges of the slot. 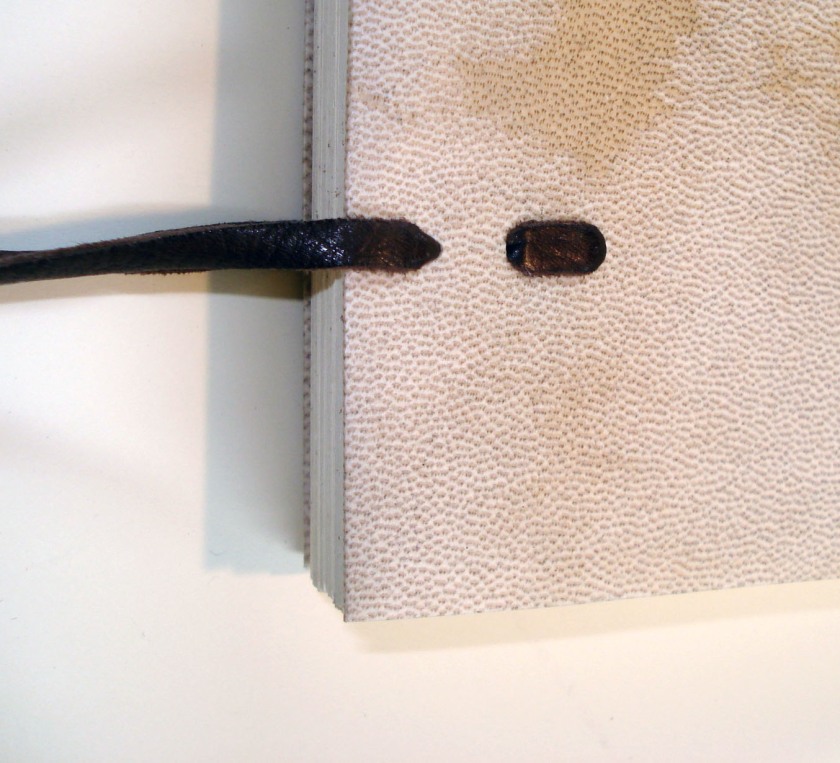 The structure of the tie also holds the simple turn-ins of the stiff parchment together. 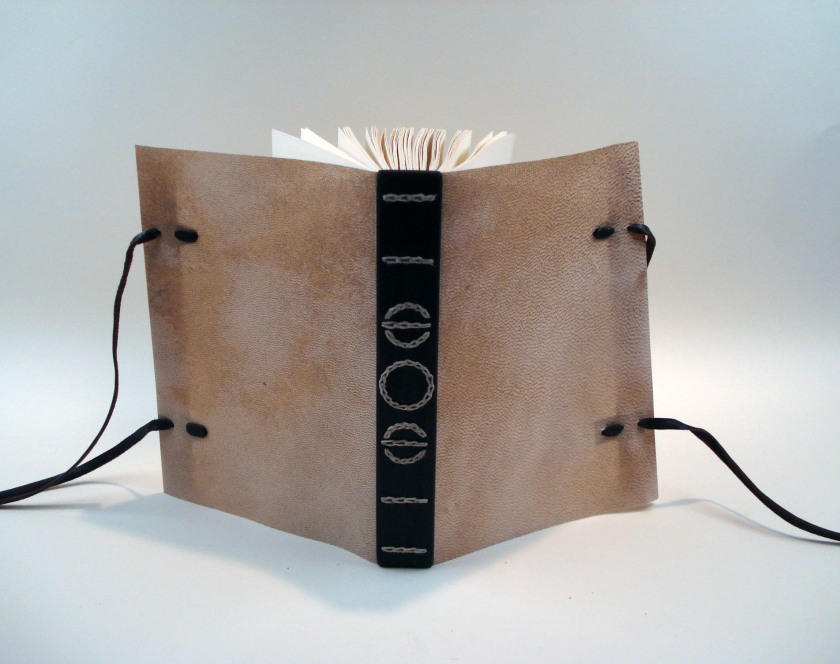 5 thoughts on “Return of the ‘Kettenstichheftung’”