The next paper binding that I’m going to share is by far the simplest structure that we’ve done. Rhodes (1995) describes these stiffened paper bindings as “beefed-up wrappers with thin board or thick paper supports” (p. 58). While they appear very similar to the typical modern, adhesive-bound trade paperback, these books are much more durable. Cloonan (1991) states that this structure was typically used to bind up issues of periodicals (p. 8), and in fact the example in the school’s collection is a gathering of German pharmaceutical journals from 1804.

Textblocks of this variety are often sewn unto supports, such as cord or vellum slips  (Frost, 1982, p. 64) – the latter variety contributing greatly to the overall strength of the structure. I made my models based on the example in our collection – sewing the textblock on two thick vellum slips in the same somewhat erratic abbreviated pattern.

While the thread used in these bindings is rather course, the softness of the paper absorbs a lot of the swell and allows the textblock to remain square.

The endsheets in the historical example are a variation on the hooked endsheet used in my lapped component models. In this case, a whole bifolio is not used. Instead a leaf  is cut to the size of the textblock, but with approximately half an inch added to the width. One fold is made so that the leaf is now the width of the textblock + 0.25″. Another parallel fold is made  0.25″ from the first, creating a hook in which the first or last section will sit. This endsheet, therefore, has a small stub instead of a flyleaf.

After sewing, the textblock is set square and the spine glued up with hide glue. Thin pasteboards are adhered to the vellum supports and the fore-edge is plowed. 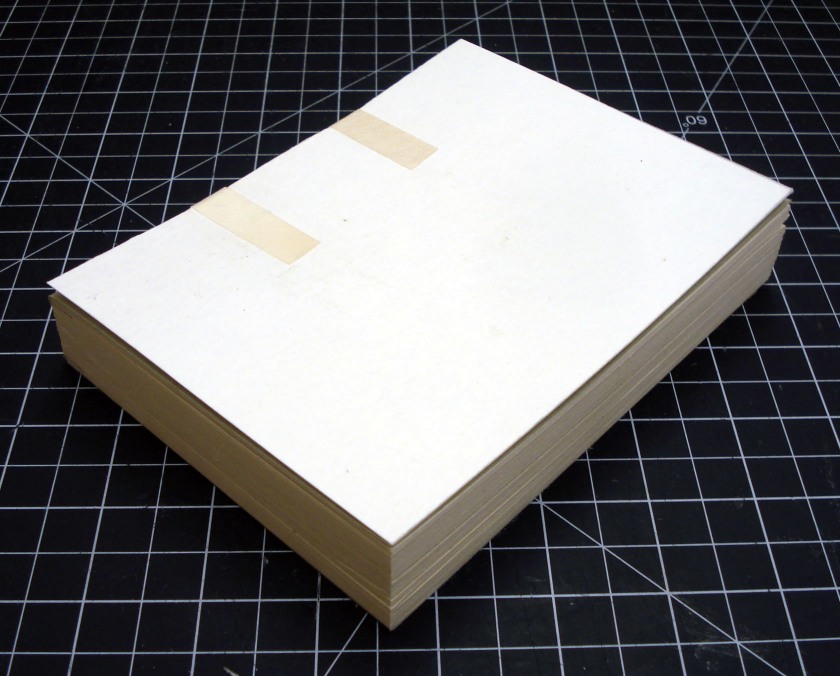 While the examples that I have seen are very square, I don’t see why a round couldn’t be put into the spine at this point – assuming this is considered a permanent binding structure. If these bindings were just meant to be temporary wrappers as Cloonan suggests (p. 45), however, shaping and trimming would not be necessary and could make rebinding more difficult.

The outside of the boards are then covered in decorative paper and the pastedowns are adhered to the inside. I used marbled paper as the covering material for my models. The green is a Atelier Flavio Aquilina paper, while the tan is a paper that I made during the workshop with the Chena River Marblers. To finish, the head and tail are trimmed, leaving turn-ins (and sometimes squares) at just the fore-edge.

Back to the subject of spine shaping, I made two different models to see how they would act. After fully opening and handling the version with the completely squared spine, it began to go concave rather quickly (left). On the second version, I rounded the spine just a bit before covering and it has retained its shape better (right).

All in all, I really like this structure for its speed, durability, and adaptability; repairing or rebinding this structure is relatively easy.  I just wish that I could buy modern editions in this form, rather than the glued up stacks of single sheets that you find in the bookstore today.

Next up, I will be writing about the laced paper case and limp vellum structure. In an effort to be a little more productive with this blog, I’m going to try and make the posts a bit shorter, but commit to publishing one every Sunday.