As a segue between case binding and split-board binding, the first years spent some time making a style of book known, at least around our department, as On-set Boards. 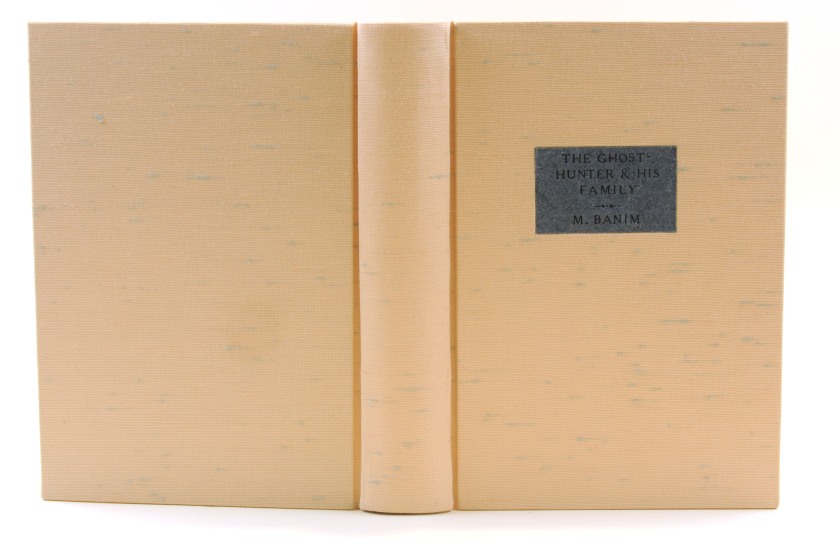 Laura Young (1995) calls this a Bradel binding, a Bonnet, or a Bristol Board Binding. Technically, there is no real difference in sewing or board attachment from a Bradel-style case – the covers are just built up on the book rather than being constructed separately and attached to the textblock later. The on-set boards structure mostly just functions as an academic exercise in covering  in-boards, but it does allow you to get very small and even squares. In describing the method for putting one together and comparing the final product to a case structure, this should become more clear. I have images of a couple of different books in this post to illustrate the process.

First off, the textblock is prepared in the usual way, but with two slight modifications to the endpaper structure and sewing supports. The endpapers for this binding must include a waste sheet. This is either a single folio that is wrapped around the flyleaf/pastedown or a stub that is tipped between the first and second sections with a conjugate leaf that wraps around the outside of the textblock. Either way, you end up with a protective sheet, sewn through the fold, on the outside of the front and back of the textblock. The sewing supports should be of a variety that can be fanned out and pasted down flat, such as German-style linen tapes or flattened cords. The tapes are a bit easier to work with, since they start out woven and can be frayed out when the sewing is done.

Flattened cords are a bit trickier to handle. Beginning with a medium weight cord, the individual parts are unwound and “combed through” to separate out the fibers. The frayed cord is then worked with the back side of the bookbinders knife to remove all of the short fibers. When finished, only the long individual fibers are left and these can be wrapped in paper to keep them together during sewing. Now they are known as moustaches.

As the sections are sewn, the paper wrapper can be shifted out of the way.

Next the book is glued up, rounded and backed, endbands put on, and spine lined with textile and/or paper, etc. At this stage, the frayed out tapes or cords are pasted to the waste sheet and fanned out. The waste sheet is also torn down from the head and tail at the tip of the shoulder enough to accommodate the cloth turn-in. This will make sense later on.

In the next step, the bonnet is constructed. This is composed of the spine stiffening strip, cut to spine width and oversized in length, and a piece of thin, strong paper that is about 4″ wider than the book spine and about 2″ longer. The bonnet is glued out (leaving a half-inch or so on the sides unglued) and the spine stiffener is placed at its center. The bonnet is then gloved onto the textblock and worked into the shoulder and flat onto the waste sheet. When dry, the edges of the bonnet can be scarf-torn off – like in the image below. 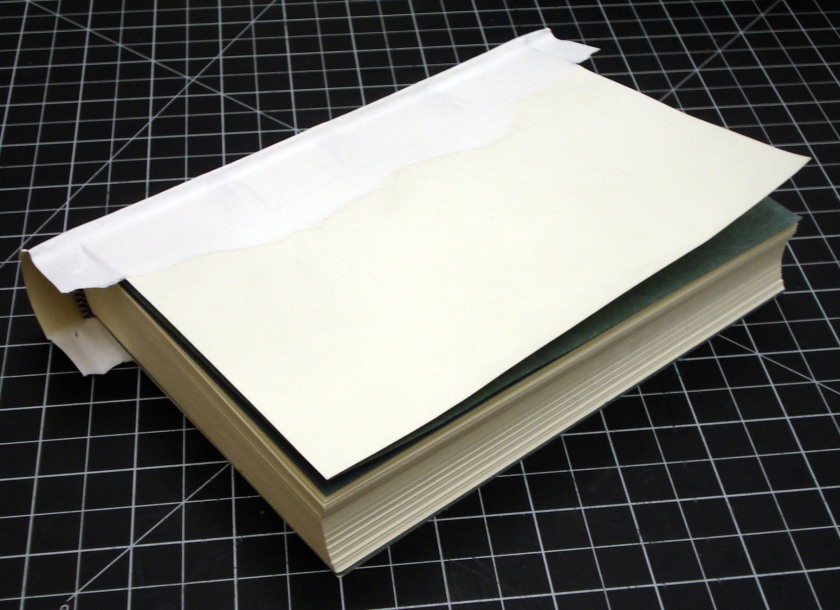 At this point, it is best to re-open the torn waste sheet at the head and tail with the bonefolder, just in case any adhesive got in. Next, boards can be cut to height – but left long at the fore-edge. A few inches of the spine edge of the board is glued up and the board is placed in position on the textblock. When both boards are evenly on, the book is nipped. After drying, the part of the waste sheet that is not adhered to the inside of the board can be scarfed off and lightly sanded smooth. The extra length of the bonnet is trimmed flush with the boards using scissors, and the fore-edges of the boards are trimmed to give even shoulders all the way around. The book is now ready to be covered. For full cloth covering, the whole piece of cloth is glued out, placed onto the front board, worked into the front joint and around the spine. The next joint is then worked and finally, the cloth is adhered to the back board. At this point the head and tail edges of cloth are turned in, going between the spine of the textblock and the bonnet and taking advantage of those tears in the waste sheet at the head and tail. The image below shows both the board attachment and one complete turn-in. The turn-in in the foreground is about to be done. 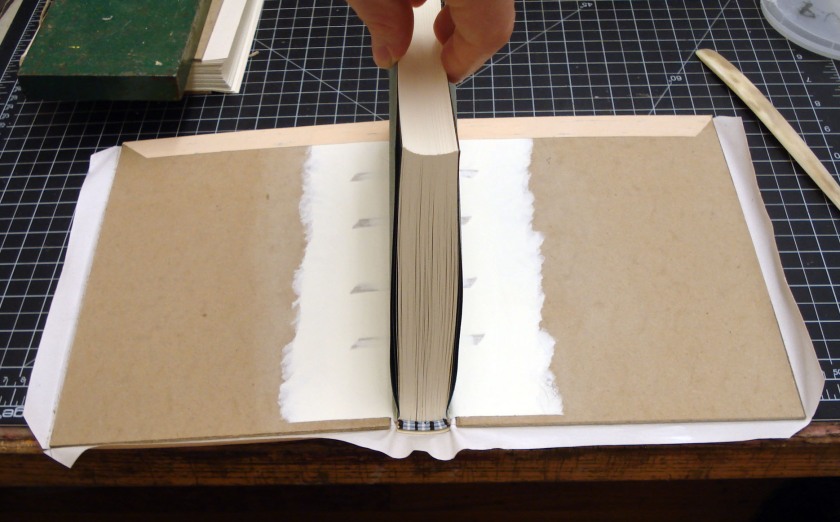 After that, the fore-edge turn-ins are done, trimmed out, the endpapers pasted down, and the book is nipped again. The resulting binding is structurally like a case, but maybe a bit more refined on the inside since the squares are usually smaller and the board attachment is sanded smooth. 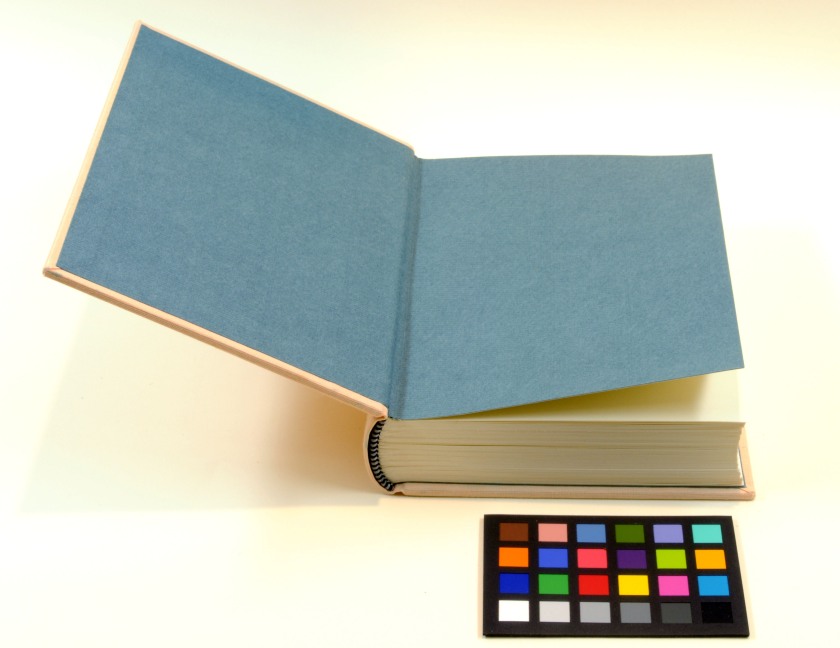 This particular book – a copy of The Ghost Hunter and His Family that I was given in sheets – has a single core endband with a bead on the front. So far, I have better luck getting a nice a headcap shape when covering in-boards, rather than covering off the book. I guess I have a bad habit of crushing the endcaps of my case spines after turning-in.

This particular volume is kind of small and printed on thick paper, so there isn’t really any drape in the opening. 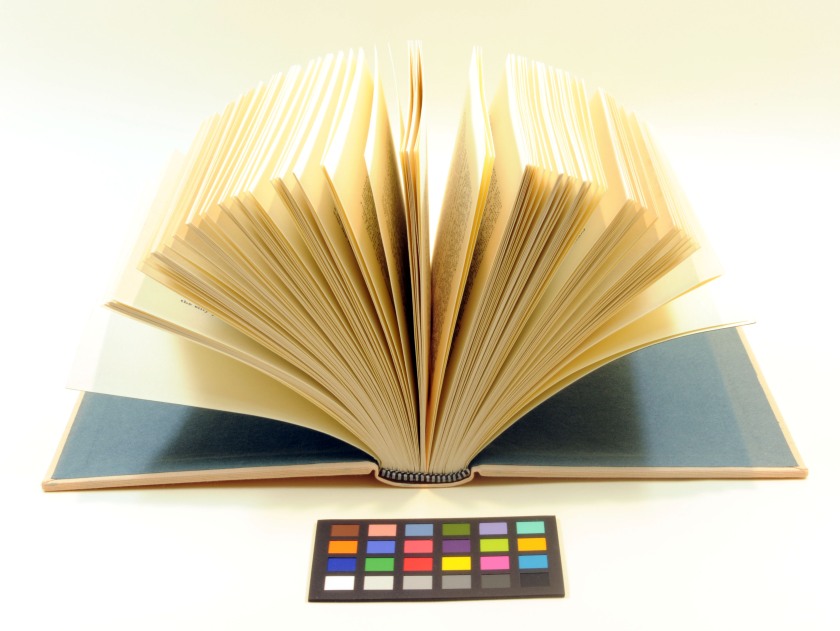 I also used this structure to bind a copy of Don Etherington’s Bookbinding & Conservation : A Sixty-year Odyssey of Art and Craft. This one is covered in black Canapetta with a black goatskin label stamped in gold. 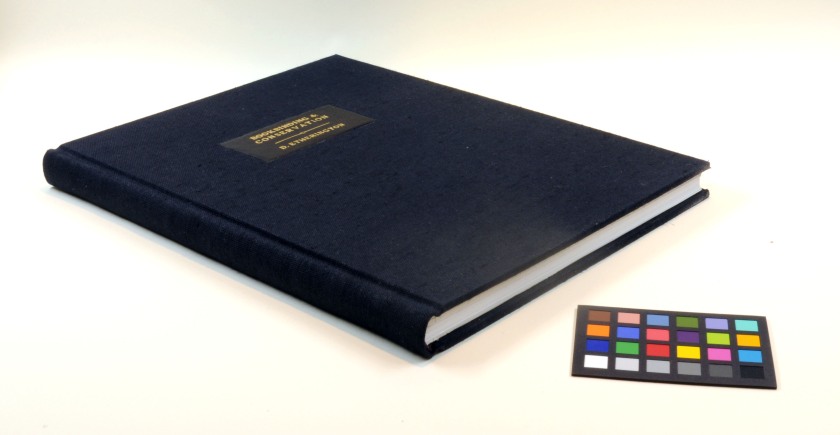 Trying to keep it simple, I used black Ingres for endsheets. I also learned that completely black books are very hard to photograph clearly on a light background.

This book is much larger than the other, so the opening looks a little better.

I haven’t had a chance to read this one yet. It’s next on my list after I finish Julia Miller’s Books Will Speak Plain.

Next time on Work of the Hand: a workshop with the Chena River Marblers, a portfolio production project, and split-board bindings. Not sure which order, but they are all in the works!